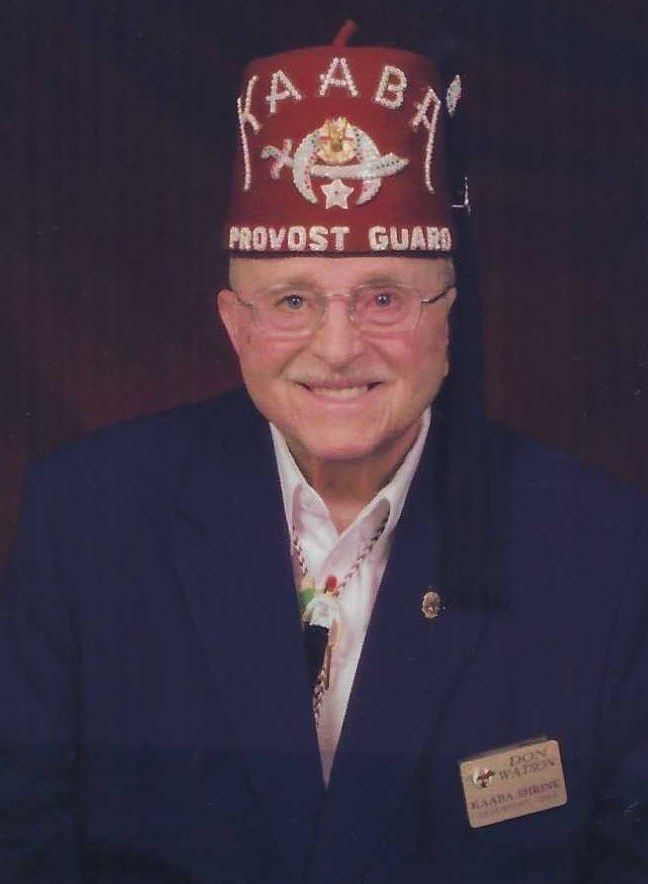 Visitation will be on Thursday, July 28th from 4:00 - 6:00 P.M. at the Ralph J. Wittich-Riley-Freers Funeral Home. Funeral Services will be held on Friday, July 29, 2022 at 10:00 A.M. at the funeral home. Per his request, the rite of cremation will be accorded after the visitation. Burial will be at the Greenwood Cemetery. Memorials may be made to the Shriners Children Hospital of Chicago or may be left at the funeral home for the family.

Don attended country school through the 8th grade. He was a graduate of Muscatine High School, Class of 1947 where he was active in football and F.F.A.

In 1950 he enlisted in the United States Marine Corps where he served during the Korean Conflict serving in Korea and Japan. He received an Honorable Discharge in 1962. Two of his greatest honors were being selected for the Honor Tour of the Quad Cities and on his 90th Birthday receiving a Quilt of Valor that was made by his niece, Patti (Watson) Strause. After his discharge he was employed by I. H. Farmall Works in Rock Island, IL, a job he held until their plant closing in 1982 at which time he retired. He then became employed by the City of Muscatine as a MusCaBus Driver, a job he enjoyed very much and participated in several National Bus Roadeos, winning in some.

Don is survived by his wife Dianne, children, Greg Watson and Nancy Seda of California, Don (Angela) Watson of Minnesota, Ken Watson of Muscatine, and several grandchildren and great grandchildren. He was preceded in death by one son, Steven (infancy) and one daughter, Diana, a great granddaughter, his parents, and 4 siblings, Blaine, David and Albert Watson and Mary Watson Schantz.

"praying God grants peace to all the family and friends of Don Watson , may all of you be wrapped in hugs as we mourn the loss of Don as he has gone to be with the Lord now Will miss seeing him at the get togethers. It has created a hole in our lives , and now we need to fill it up with something positive, I pray we all find what that is and remember Don as he also was a volunteer with the shriners and other services , including serving our country as well. condolences to the family and friends Tom and Janet Leeper"