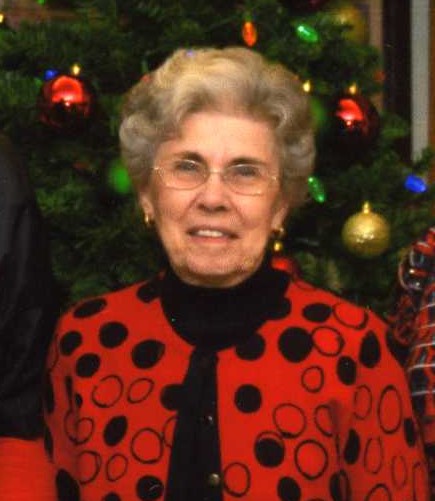 Joan spent her growing up and school years in Lily. She graduated from White Lake High School in 1947. She raised her family on Arbutus Lake near Pickerel.

Joan was a lifelong member of St. John Lutheran Church in Pickerel. She was active in the Ladies Aid, Alter Guild, and Women's Missionary League. She also taught vacation bible school and Sunday school.

Joan was a homemaker and enjoyed entertaining family and friends. She liked playing cards, especially cribbage and bridge. She was an avid knitter for Warm Up America.

Survivors include a daughter, Joleen (Harlan) Davison of Antigo; their children, David(Quinn) Williams and their daughter, Hannah; Aaron (Kelly) Williams and their children, Kate and Jack; Kyle (Vesna Jovanovic) Davison; and Britta (Jeremy) LeMier and their daughters, Saiya and Brooklyn; a son, Jay Cook of Plover; his son, Steven (Cindy Reyes) Cook and their son, Julian Reyes-Cook; and two sisters, Jane Jackson of Pickerel and Judy (Vic) Skaleski of Green Bay. She is further survived by many nieces, nephews, other relatives, and friends.

She was preceded in death by a daughter-in-law, Linda Cook; a sister and brother-in-law Joyce and Kenneth Peters; a brother-in-law, Carl Jackson; and a nephew, Bradley Jackson.

A funeral service will be held on Friday, September 2, 2022, at 11 a.m. at St. John Lutheran Church, Pickerel with Reverend Richard Kelm officiating. Burial will take place in the Antigo Cemetery. Visitation will be Friday at the church from 10 a.m. until the time of service.

A special thank you to the staff of Rosalia Gardens and Aspirus Hospice for their compassionate care of Joan.

"Thank you Aunt Joan for loving our dad Wallace Cook and bringing happiness into his life. Lovingly Cydne and Janis "

"Dale and family, we are so sorry to hear of your Mothers passing. Our thoughts and prayers are with all of you. Our Deepest Sympathy "