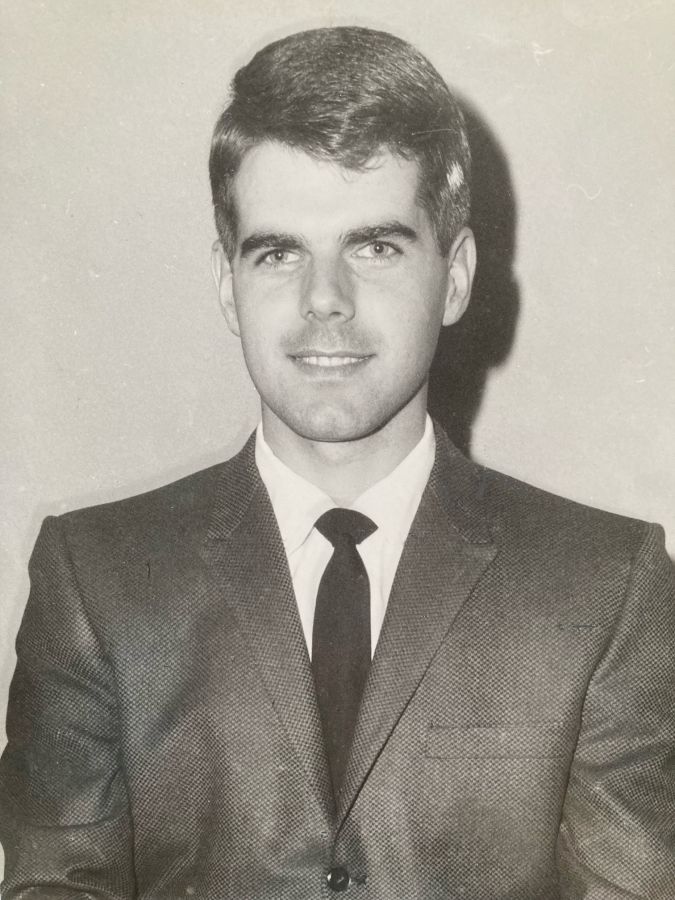 Gerald Theodore Kerns, who fondly went by "Gerry", died peacefully on August 15, 2022, at the age of 88 in Bellevue, Washington, with life partner, Eric Miller, by his side. Gerry Kerns was born on December 5, 1933, in Seattle, Washington, to Gerald and Elizabeth (Betty) Kerns. He grew up in Seattle with his siblings - brother, Robert (Bob) Kerns, and sister, Theresa (Kerns) Harris (deceased).

After graduating high school in Seattle, Gerry attended Carleton College in Northfield, Minnesota. His fondest college memories came from Carleton College where he made life-long friends, staying in touch over the last 60+ years. Gerry completed his Bachelor of Arts degree in 1956 at Seattle University with a concentration in history and child development. Shortly following graduation, he joined the United States Navy where he proudly served as a Public Information Yeoman on an aircraft carrier; honorably discharged in 1958. Gerry later returned to Seattle Pacific University to obtain his Master's in Education with a concentration in Psychotherapy, Adolescent Development and Research.

Gerry's journey of public service, and most notably advocacy for children, began in 1958 in Wenatchee, WA, where he was a Child Welfare Caseworker for the Department of Social and Health Services. He went on to be a Chief Probation Officer in Okanogan-Ferry Juvenile Court, as well as King County Juvenile Court in Seattle, WA. Most impactful, however, was his time at Morning Star Boys Ranch in Spokane, WA, from 1962-64, where he was a Counselor and Program Supervisor helping societies most troubled youth navigate back into "normal life". It was a challenging job with incredible reward as throughout Gerry's life following his time at the ranch, he would receive a letter now and then from a young person he had counseled who "made it back" and credits it to the guidance and encouragement they received from him. In 1967, Gerry joined Catholic Community Services where he spent over 11 years focusing on counseling, adoption, and foster care. He finished out his "corporate" journey at the Department of Social and Health Services, Children and Family, King County, retiring in 2003. During retirement, Gerry very much enjoyed working for the school district as a Paraprofessional Educator where he made an incredible impact on special youth, and again, made fast friends along the way.

Gerry enjoyed "traveling the world!" In his youth, he couldn't wait for the next family road trip going to places like Montana and beyond. He graduated to train adventures traveling across the United States to college and other exciting sites. An incredible once-in-a-lifetime story he used to tell was meeting Ethel Merman in New York's theatre district during shore leave while he was in the Navy - "She invited us to her show!" To celebrate retirement, he went to Naples, Italy, to visit his daughter Laura, Don Bain, and his new grandchild, Sarah. We still giggle at his comment about Rome ... "This place is so old!" Gerry was always keeping track of the Carleton College reunions and had the most fun attending the Chicago event. But most of all he loved the "Big Island" - Hawaii... his and Eric's regular destination for their annual rest and relaxation. The cherry on top was visiting family who also lived on the Island. Very special times indeed.

Gerry was a man of many talents! Throughout his life he dabbled in acting, modeling, singing and on-camera talent. Most notable was his minor role in the 1992 movie, "Crazy in Love", starring Holly Hunter; his hand doing the "Okay" sign on a billboard for National Bank; and singing in the United States Naval Concert Choir. Gerry's good looks even snagged him the title of "Ski King" in high school! His acting training served him well in 1986 when he was interviewed on "Seattle Today" regarding family communications, as well as during his time spent as an Expert Professional Witness in many family courts. It was always a special and memorable birthday if you were lucky enough to have Gerry call you and sing the Marilyn Monroe version of "Happy Birthday, Mr. President".

Gerry married Sally (Duncan) in November 1966. They moved from Seattle to Federal Way, WA, in 1970 where they raised their family. They had many happy years enjoying Hood Canal in the summers, regular trips to the Puyallup Fair in the fall, and beautiful walks along Redondo Beach all year round. In 1987, Gerry and Sally divorced but remained great, life-long friends.

In spring 1999, Gerry happily settled in Mercer Island, WA, with Eric. He became the "man about town" where on any given day you could find him walking the 311 steps at the Mercerdale Park stair hike, enjoying the beautiful view and a cold beverage on the deck of the Roanoke Inn, or cooking one of his many incredible gourmet meals at home. Gerry had the gift of finding joy in everything he did and appreciated every day.

Gerry is survived by his partner, Eric Miller; brother, Robert (Bob) Kerns (Gailee); daughters Laura (Kerns) Bain (Gene Smith) and Cynthia (Cindy) Kerns; son Timothy (Tim) Kerns; granddaughters Sarah (Bain) Kjos (Paul) and Brianna Bain; and great grandchildren Zola Kjos and Haak Kjos. Extended family was of utmost importance to Gerry, and he enjoyed keeping in touch through special cards and letters. He had the gift of poetic and witty writing which always made correspondence with him very special.

Empathy, sensitivity, and passion were Gerry's superpowers making you feel understood and loved. Gerry insisted we all take care of ourselves and learn to be your own best friend - only then can you give the best of yourself to others.
He will be cherished in the hearts of all that knew him.

"Oh, we ain't got a barrel of money
Maybe we're ragged and funny
But we'll travel along, singin' a song
Side by side

Don't know what's comin' tomorrow
Maybe it's trouble and sorrow
But we'll travel the road, sharin' our load
Side by side

Through all kinds of weather
What if the sky should fall?
Just as long as we're together
It doesn't matter at all

When they've all had their quarrels and parted
We'll be the same as we started
Just travelin' along, singin' our song
Side by side..."