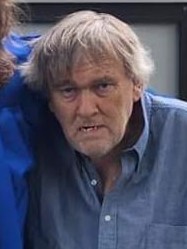 David "Dave" Michael Frattalone Sr., 61, of Maxwell, Iowa passed away on his home surrounded by his loving family on Tuesday, October 18, 2022. The family will be holding a memorial service at 3:00 p.m. at Rock Creek Bible Church in Maxwell, Iowa on Saturday, October 22, 2022. A private family burial will be held at a later date in the Maxwell Cemetery in Maxwell, Iowa.

Dave was born on March 13, 1961, to Charles and Katherine (Rogers) Frattalone in St. Paul, Minnesota. He grew up in St. Paul and attended school there. Following school, he moved to Nebraska and began his family. Dave later attended college where he excelled at writing. He had a great passion for cooking and worked at various restaurants over the years as a chef. Dave enjoyed spending time with his family, fishing, playing computer games, and cooking for people.

Memorial contributions can be directed to Maxwell State Bank for the David Frattalone memorial fund.

Fredregill Funeral & Cremation Care has been entrusted with the care of Dave and his family.