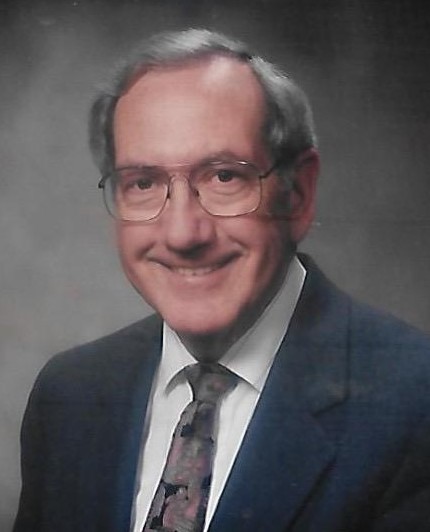 Dale Laverne Mount, age 87, passed peacefully at home with his wife and caregiver by his side on December 31, 2022. A visitation will be held at 10:00 a.m. on Monday, January 9, 2023, at Grandon Funeral and Cremation Care, 414 Lincoln Way Ames, Iowa 50010, funeral services will follow at 11:00 a.m. Burial will be at Township Cemetery, Grand Junction, Iowa later that afternoon.

Dale was born October 1, 1935, to Virgil and Mary (Collogan) Mount. He was the youngest of six children. After graduation from high school in Grand junction, Iowa, Dale attended telegraphy school in Minneapolis. Following that, Dale worked for the Chicago Northwestern Railroad in the Marshalltown area. He then took a job with the railroad employees credit union and consolidated thirteen credit unions in Cedar Rapids. The family subsequently moved to Ames where Dale managed United Methodist Ministers Credit Union for thirty plus years, retiring in 2000. Dale was on the board of directors of several Iowa credit unions during his thirty plus years. During his tenure many Iowa Credit unions consolidated their share draft and credit card processing into one organization called the Members Group, which Dale helped organize.

Dale had a life-long love of trains and was involved with many tourist and historical railroad societies becoming a board member and president of the Boone and Scenic Railroad; he also helped start the dinner trains for all to enjoy the fun of the railways. He was Board member, volunteer, qualifying conductor each year, and a tour guide for the Boone Scenic Railroad. Dale and Linda traveled many times with other railroad volunteers from Boone and Scenic Valley to the "Trains" convention held in different states and countries to ride and observe other tourist trains, history, and business strategies. They attended seminars regarding tourist railroads to receive and share ideas in all facets of tourist train operation.

When Dale retired, he took a part time job with a company responsible for transporting Union Pacific Railroad crews to and from their trains, covering routes from Boone to Fremont, Nebraska, East to Clinton, and North to Mason City. Dale also volunteered for Operation Life Saver, educating Boy Scout Troops and school children on railroad safety. He was a member of the Iowa Historical Railroad Society, Burlington Railroad Historical Society, and the Chicago Northwestern Historical Society to name a few. For many years he organized Ames area rail fans, where railroad enthusiasts met once a month to share pictures, stories, and experiences of both current day railroad operations as well as historical operations. Dale also enjoyed model railroad trains. In his home in Ames, he had a large model railroad set up for his enjoyment.

Dale also completed 34 RAGBRAIs. On one ride he was hit by a car, thrown on to the hood of a car, taken to a hospital, examined, and cleared and only missed a few hours of riding the very next day once the organizers could find him a bike to finish out the rest of the week's rides. He and Linda also liked riding with a group of friends who went overseas to the Netherlands, Germany, and Norway. In 2000 Dale and Linda rode bikes from the North Sea to Amsterdam Harbor to watch the tall ships come in from their races culminating with a day and evening boating in the harbor to see the ships lit up at night and touring the ships during the day. The couple also traveled to Italy twice, Poland, Hungary, Czech Republic, Germany, Austria, The Holy Land, France, Spain, Portugal, and Croatia.

Dale was a member of First United Methodist Church in Ames where he served as treasurer, co-chair of the Stewardship Committee, Communion Steward, usher, and was on the committee to form the Saturday at First Service.

Dale was a kind and gentle man who loved spending time with family and friends. He and his siblings met frequently for Sunday dinner where the ladies visited, and the men played cards. Dale would also take his sister out to dance on Saturday evenings. He had a sense of humor that touched all who met him. In later years Dale developed a fondness for Oreo Cookies and milk and peppermint candies. Many funny stories developed around this habit.

Dale was preceded in death by his parents, brothers; Wayne, Warren, Merle, Dwight, and sister Genevieve.

In lieu of flowers memorials may be directed to Boone and Scenic Valley, Operation Life Saver of Iowa, or St. Croix Hospice.

"I have many fond memories of Dale from First United Methodist Church and especially Saturday at First. My deepest sympathy to Linda and all of Dale's family and friends. "

"Becky and I wish to extend our condolences to Dale's family. I first met him at the Boone and Scenic Valley when I was a volunteer there. After that our paths would cross at the Ames Railfan meetings and when he drove van hauling UP crews around. We will miss him. "

"I met Dale through a cycling friend, Bob who did 39 ragbrais. We showed up at many of the same rides. Then I went to work with the scenic valley railroad . Met him again. It was always a joy to see him. "