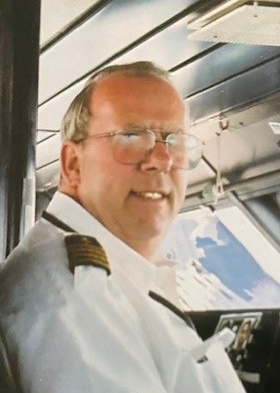 David E. Reid, age 79, of Tiverton, Rhode Island, passed away on January 17, 2023 surrounded by his loving family, after a brief illness.

David was born in Fall River, MA to Edson Reid and A. Irene (Hodgins) Reid. David was the husband of Bette (Longson) Reid of Tiverton for 60 years.

David grew up in Tiverton, RI and graduated from BMC Durfee High School in 1962. Following his love of the ocean, he soon began certification for his Captain's license through the US Coast Guard and started his career on tugboats up and down the east coast. After 25 years on tugs, he began a second career with the Steamship Authority, piloting the ferries between the Cape and Nantucket and Martha's Vineyard. He enjoyed another 21 years with the Steamship Authority until his retirement in 2011. He and Bette enjoyed many wonderful trips together, especially the cruises and excursions in Alaska.

He was preceded in death by his parents and two sisters, Karen Wheeler and Linda Oliveira.

Funeral services will be private.

"I worked with Dave for a number of yrs on the ferriesout of WH. His towing stories were hilarious and brokeup the monotony of the job. He was always a joy to work with.. he will be missed. My condolences goouttoBette andhis family. He wasa good shipmate! Scott Peterson"

"I am honored to have worked with David, a true gentleman, a great man, and a good Captain. Oh, and could he tell a story. "

"Fair Winds and a Following Sea to the Other Side. You were always a pleasure to work with Dave."