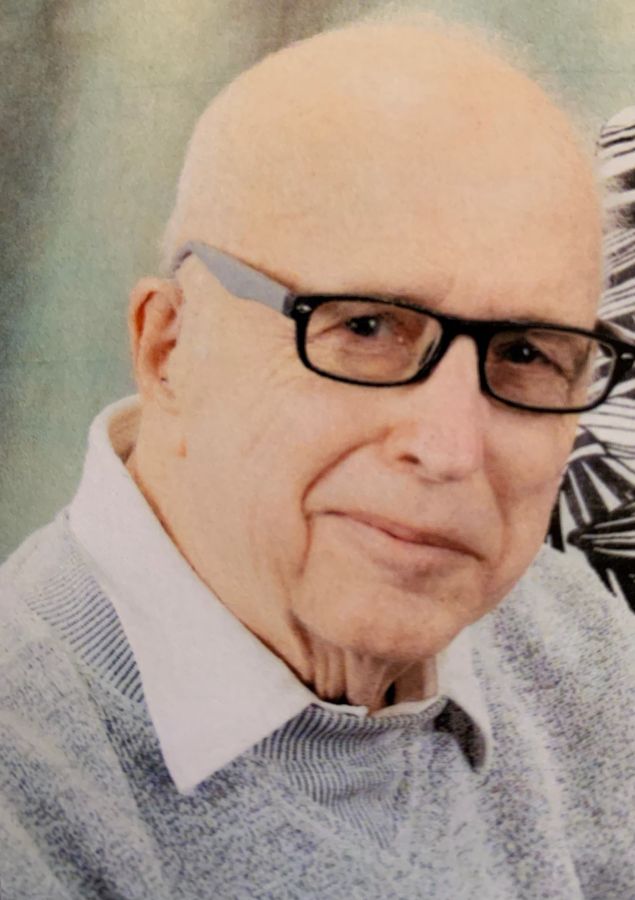 Bill (William) R. French passed away quietly in his sleep on January 23, 2023 while a resident at Madonna Towers in Rochester, MN. He was 87. He and Monica had just celebrated their 65th wedding anniversary in November.

During the flood of 1935, in Whitney Point, Broome County, New York, a baby boy was born to William Paul French and Florence Landers French. They called him William Richard French. He was the youngest of 4 boys. Bill went to both elementary & highschool in Whitney Point, graduating in 1953. He was active in sports, lettering in baseball. The highlight of his highschool years was his senior trip to New York City where his class saw "Porgy & Bess." After graduation he drove his new Chevy to Arizona to see his aunt & uncle, Betty and Harrison McGrath. On August 10, 1953 he started work at IBM in Endicott, NY. In March 1957 he transferred to Rochester, MN shortly after they opened the new plant.

On November 16, 1957 he married Monica Elaine Carroll at St. Augustine Church in Austin, MN. He was drafted in February, 1958 and went to basic at Fort Carson, CO. After basic he and Monica moved to Lawton, OK where BIll was stationed at Fort Sill for the next year and a half. Bill and Monica's oldest son, Jeff, was born there. They returned to Rochester in 1960 where he returned to his job at IBM and to a new son, Todd who was born that year. In succession were the final two of the brood, Greg, who was born in 1963 and Doug (WIlliam Douglas), born in 1964. Bill was serving in the Wabasha reserve unit in 1961 when that unit was called up during the Berlin Wall Crisis. His unit was shipped to Ft. Polk, LA., where, it is said, they had to chase wild hogs out of some of the WWII aged barracks. He was released from there in August of 1962 & he returned to Rochester and his job at IBM.

Bill and Monica lived in Rochester, Hammond, Colchester, VT., Belleview, FL., Kasson, and more recently resided at Realife Co-Op in Rochester. They traveled a lot to visit relatives all over the country. They traveled to Germany, Korea and Alaska to visit sons who were serving in the military at that time. They also traveled to Mexico, England and Ireland with several of Monica's cousins. Bill's dream would have been to go to Hawaii, the one state he hadn't been in.

Bill was active in his son's lives coaching them, as they grew up, in baseball while living in Hammond. As his sons aged he played alongside them in slow pitch softball. He taught them how to fish and hunt as they grew older. As his sons became active in school sports he would patiently wait for them, following his day of work, at their respective school for, sometimes, several hours. When his sons were on the field you would find Bill in the stands watching them play.

Bill loved sports, jigsaw puzzles and in later years, going to the casino and doing sudoku.
His wife, Monica, predeceased Bill by 18 days, passing away on January 5, 2023. His parents and his brothers Roger (Flora Snirtch), Norman "Tib" (Lillian), and Alan, and one grandson,

Ranfranz and Vine Funeral Home is honored to be serving the French family; to share a special memory or condolence, please visit www.ranfranzandvinefh.com

"He was a wonderful person."

"This is so beautifully written. Uncle Bill was like a big brother to my brother, Neil and I. He spent a lot of time at our house when his brother Tib married our mother Lillian. He and Neil played catch in front of our house for hours. There are so many good memories as we adjusted to life with the French family. Good years, good times. Be at peace dear uncle. Hugs to his family. Nadene Hartley"