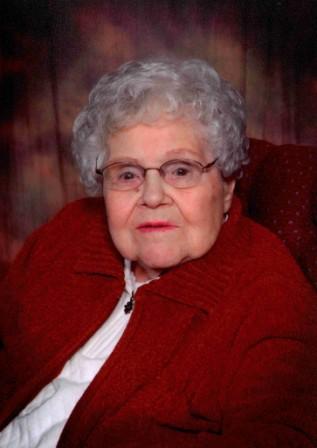 Jessie May Lawrence, was born January 5, 1917, near Cainsville, Missouri, the youngest of 10 children and daughter of Jesse Newton and Ada May (Rinehart) Lovelace and departed this life on Monday, April 6, 2009 at the Israel Family Hospice House of Ames, Iowa at the age of 92 years, 3 months and 1 day. Visitation will be 4:00 - 6:00 PM Wednesday April 8 at Grandon Funeral and Cremation Care 414 Lincoln Way Ames, Iowa and one hour before the service Friday April 10 at 11:00 AM at United Methodist Church Gilman City, Missouri.
Jessie grew up between Ridgeway and Eagleville and graduated from Eagleville High School in 1935. She was active in music and was a school librarian. Jessie's father sang tenor, so there was music in the house and Jessie sang alto. She learned to play the piano from Ruth and Mary's lesson books and with their help. Jessie was the accompanist for the quartet groups in high school. They were a religious family and very close. They worked hard and they all had chores.
She worked at the ASCS office at the courthouse in Bethany after graduation and she lived in an apartment in Bethany. Jessie was baptized May 31, 1942 by Reverend Bill Pollack.
After losing her fiancÃ© in World War II, she met and married Everett Lawrence, Jr. on October 26, 1947. The lived with his mother and Elaine, for a couple of years then bought the house that later became known as 501 Hoffman in Gilman City . She resided there till moving to Bickford Cottage in Ames after Thanksgiving of 1999.
Jessie was a member of the Easter Star Lodge #23 for 60 years and Gilman Rebekah Lodge #803 for 61 years. She enjoyed gardening, being outdoors, cooking and quilting.
After moving to Ames, Bickford Cottage became home to her. She met many residents and workers and enjoyed the musical entertainment there. Her family enjoyed having her close by, going to soccer, baseball, basketball games, summer band concerts and family get togethers.
Jessie was preceded in death by her parents; husband; sisters, Leah, Ada and Mary; brothers, Floyd, Joe, Paul and 2 children in infancy.
Survivors include a daughter, Joyce Coffman, Ames, Iowa; grandsons, Lawrence Joe Coffman, Ames, Iowa and Michael (Ashley) Coffman, Albert Lea, Minnesota; great-granddaughter, Aydrie Coffman; sister, Ruth E. Casebolt, Bethany , Missouri and several nieces and nephews.