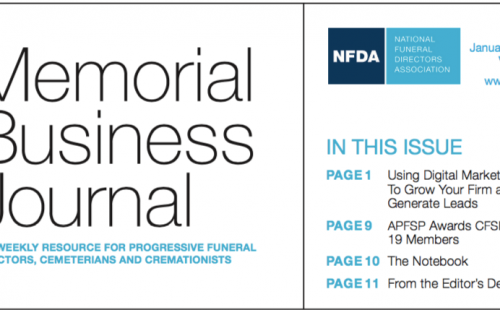 Our own Zachary Garbow was featured in January’s Memorial Business Journal. Make sure you subscribe to the journal to read this and many other great stories! Check out an excerpt below and make sure you log-in for the full story!

“You might be a little uneasy with what’s going on and what the future holds,” Zack Garbow told attendees during his presentation, “Using Digital Marketing to Grow Your Funeral Home and Generate Leads,” at the recent NFDA International Convention & Expo. “And a lot is changing right now that’s really going to affect much of your work.”

Garbow, co-founder and head geek at Funeral Innovations, was referring to the new world of being
online 24/7. With smartphones, tablets, desktops and laptops within arm’s reach all day, every day, people are always connected to the internet. “Now you see this everywhere you go,” Garbow said. “You go to the bank and everyone waiting in line is on their phone. If you go out to dinner, you’ll see a couple on a date and will both be Instagramming their food.”

At the airport, Garbow has seen people fighting over outlets to stay online. The challenge comes when a business ignores the trend – not unlike Sears – and keeps doing things the way they have always done them. “In that case, I think you know what’s going to happen, and it’s not good,” Garbow said.

“It is is a big change, and it has profound implications for how people live and interact, how they shop and how they consume,” he said. “And as a result of this, some firms are going to be in trouble moving into the future.” …

Even as part of his title at Funeral Innovations, Garbow identifies himself as a geek. He got started with programming in high school; he had an old graphing calculator and taught himself how to program on it. Instead of listening to the teacher, Garbow was creating fighter pilot games and bowling games. He attended the University of Minnesota, where he studied computer science and math. He did research at the Minnesota Supercomputing Institute as an undergrad, and when he graduated, like a good tech geek, he started working at big-tech company IBM.

At IBM, Garbow worked within IBM research, where he received more than 100 patents for his work. He was named an IBM Master Inventor, the top inventing honor in the company.

And then he quit.

“The reason I quit was I saw some things happening in the industry, not in this industry specifically, but I saw this startup called Facebook. It was kind of exciting, and they were doing big things. And I thought about the opportunity to use Facebook and other online tools to help more.”

So Garbow and his friend from IBM, Greg Young, left and started their own company, Funeral Innovations, which provides digital marketing for funeral homes. “Greg had a friend in funeral service who provided some insight into some of the problems he was experiencing taking over his family funeral home,” Garbow said.

“So we created our own so ware from scratch to manage Facebook,” he continued. In the 12 months leading up to the 2017 NFDA Convention & Expo, Funeral Innovations published 64,842 posts to Facebook for funeral homes and cemeteries, and boosted more than 3,200 posts in the last year, reaching more than 19 million people on behalf of the funeral homes and cemeteries with which they work. is, of course, gives Garbow a level of in- sight into what works and what doesn’t.

The first step in this approach is to look at your room and your community. Garbow introduced attendees to a couple of prospects in a hypothetical community. The first prospect was a guy, Jack. “Like 79% of adults in the United States, Jack spends his time on Facebook,” Garbow said. “He’s just a normal dude – he enjoys shing, he’s close with his family, and he’s taking care of his aging mother.”

Now, because of this last point, Jack is starting to think about end-of-life issues, which he probably had never considered before. “And just like most of us when we don’t understand something, he goes to Google and types in ‘end-of-life planning’ and gets a bunch of results.”

Haven’t seen the video yet? Watch it here.