The end of another year means another opportunity for a year-end list! Here’s you’ll find the 5 most popular Funeral Innovations blog posts of 2011. If you missed any of these, be sure to read up on them to stay on top of the industry!

As a bonus, I’ve included a short summary of what made each post imporant and why it was particularly popular in 2011.

5. Top 5 Reasons Why Your Obituaries Should be Hosted on Your Website

Many companies sperad misinformation to take advantage of funeral directors, particularly when it comes to the value of obituaries and search engine optimization. This article busts one of those lies and educates funeral directors about why it is critically important for your obituaries to be hosted on your own website, rather than through a 3rd party site or iframe.

This article was particularly popular because many funeral directors can relate to how companies within this industry try to take advantage of them. Educating and empowering funeral directors on the importance of having the obituaries on their website was very eye openeing to many folks.

Small funeral homes have a distinct disadvantage when it comes to search engine optimization (SEO), since their funeral home website naturally has fewer backlinks and less authority within Google. Fortunately, this article offered several tips that can drammatically help a small funeral home’s SEO, and increase the amount of organic traffic they attain.

This blog post appealed to many funeral directors because the tips for improving SEO, while targeted towards small funeral homes, can actually improve the performance of any funeral home website!

This year Funeral Innovations became the first company in the industry to use QR codes as a way of memorializing your loved ones. Funeral Innovations released a new way for these small barcodes to be scanned by people’s cellphones to be brought to a loved one’s permanent online memorial. While many other companies have since followed our lead, we were the first to put the QR codes on monuments, to link the physical stone to the online memorial. We now are using QR codes within service folders so service attendees can quickly access to the funeral home’s mobile website and leave a tribute.

Read the article to learn more about how Remembrance Codes work. This article garnered a lot of attention because it introduced a new concept of using QR codes within the funeral industry, that has since been more widely adopted by others.

2. Leaders vs Followers in the Funeral Industry

In 2011, Funeral Innovations became the industry’s leader in Facebook for Funeral Homes, offering custom Facebook Pages for funeral homes, including powerful fan-gating techniques and Facebook Microsites, full-fledged tabbed websites right within Facebook. Our new approach to Facebook for funeral homes, along with our beautiful designs gained us a lot of attention. Our competitors were caught off guard by our offerings and scrambled to catch up, in some cases copying our designs and marketing a little too closely! But imitation is the sincerest form of flattery, and we are indeed humbled by the overwhelmingly enthusiastic reception to our Facebook solution.

A little controversy is always good for getting attention, and this post was no exception. Published at the end of 2011, it quickly became one of the most popular posts on this blog, receiving a huge amount of viral traffic through Twitter and Facebook.

In advance of our presentation on social media for the funeral industry at the ICCFA Wide World of Sales Conference, we compiled a list of the top funeral homes and funeral companies on Twitter. Little did we know just how popular this list would become! It has driven an enormous amount of viral and organic visitors, and continues to be one of our most popular posts ever, even a year after it was initially published!

This post became popular for several reasons. It’s particularly useful to know the top funeral companies on Twitter, especially with so many funeral homes now recognizing the value of social media. Additionally, many people who are searching for top funeral companies are coming across this post, and it has consistently ranked as one of our most trafficked organic results.

And the good news is we’ll be compiling a new list of top funeral companies in social media in 2012. So keep your eyes open for that!

We hope you enjoyed all the amazing and exciting developments from 2011. We encourage you to continue returning to this blog for education, insights and announcements of the latest innovations in the funeral industry. We promise you that 2012 will be an even bigger year than the last! 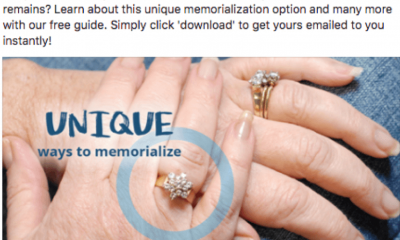 New Campaigns for Our Clients! Check Out the Latest Growth Engine Content…

Over 100 new Facebook Posts for Cremation, Pet Loss and more!